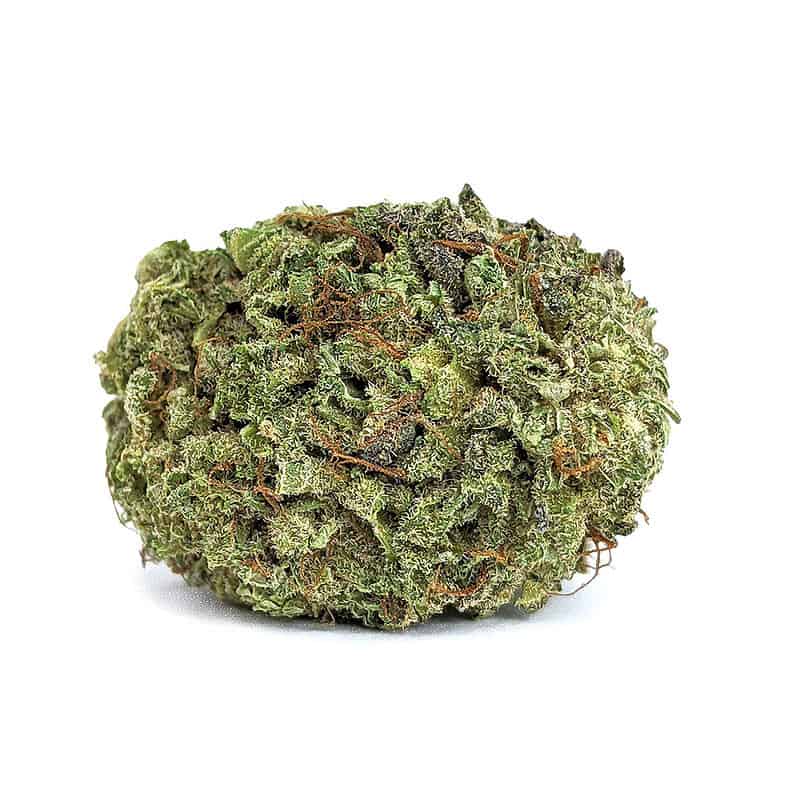 Chem Dawg strain is a legendary with an uncertain genetic history. While it is thought to be crossed from Thai and Nepalese sativa landraces by U.S. breeders, many have laid claim to this strain’s creation. ChemDawg’s origin stories include one account of a complicated seed exchange among fellow growers at a Grateful Dead concert. Another tale pinning the strain’s parentage on a Colorado strain called Dog Bud.

Whatever its beginnings, Chem Dawg has become a staple in the U.S. cannabis market for its unique taste and upbeat, energetic high. It has also been used to crossbreed several popular and successful strains. ChemDawg’s THC content has been measured at between 15% and 20%.

ChemDawg Budget Buds strain has medium-sized buds that look slightly different from those of hybrid or pure indica lineage. Long and tapered rather than popcorn-like, the flowers have relatively loose and wispy leaves. The spring green leaves are covered in sticky white trichomes, lending buds a silver-white appearance. Due to the combination of their loose structure and resinous texture, buds of this are particularly difficult to break up by hand — users preparing flowers for joints or pipes will have an easier time with a grinder.

ChemDawg Budget Buds has a smell reminiscent of diesel fuel. The pungent flowers also give off odours of earthy musk and some pine. As long as flowers are properly cured, this strain has smooth smoke that tastes sour and when inhaled. On the exhale, Chem Dawg’s smoke betrays its signature diesel taste with an ammonia-like tang that hits the top of the palate.

The high from ChemDawg hits quickly, sometimes before users have had a chance to finish appreciating its distinctive diesel aroma. Smokers may experience a sharpening of the senses and an increased hyper-awareness of their surroundings. This initially disorienting head high becomes more productively cerebral and introspective in the right set and setting. ChemDawg can lend itself to exuberant conversation. Its ability to amplify sensory experiences also makes it particularly good for creative endeavors. Many users report a palpable sense of physical relaxation although nothing near couchlock. Leading to some speculation that ChemDawg has some indica in its genetics as well.

ChemDawg’s strong cerebral high has made it valuable in treating some of the symptoms associated with:

Because of its potency and mental focus, ChemDawg has the potential to trigger the kind of manic, recursive thinking that can lead to paranoia. As such, even users with a high tolerance for THC are advised to moderate their intake accordingly.

ChemDawg’s potency has made it a valuable strain for crossbreeding. Its descendant strains include the phenotype ChemDawg 91 as well as the hugely popular hybrids Sour Diesel and OG Kush. More likely to keep users awake then put them to sleep if consumed at night, it has an almost eye-watering pungency and energizing and thought-stimulating effects. ChemDawg can be a great choice for accomplishing tasks, as well as for more celebratory circumstances as it keeps heads buzzing and conversation flowing.