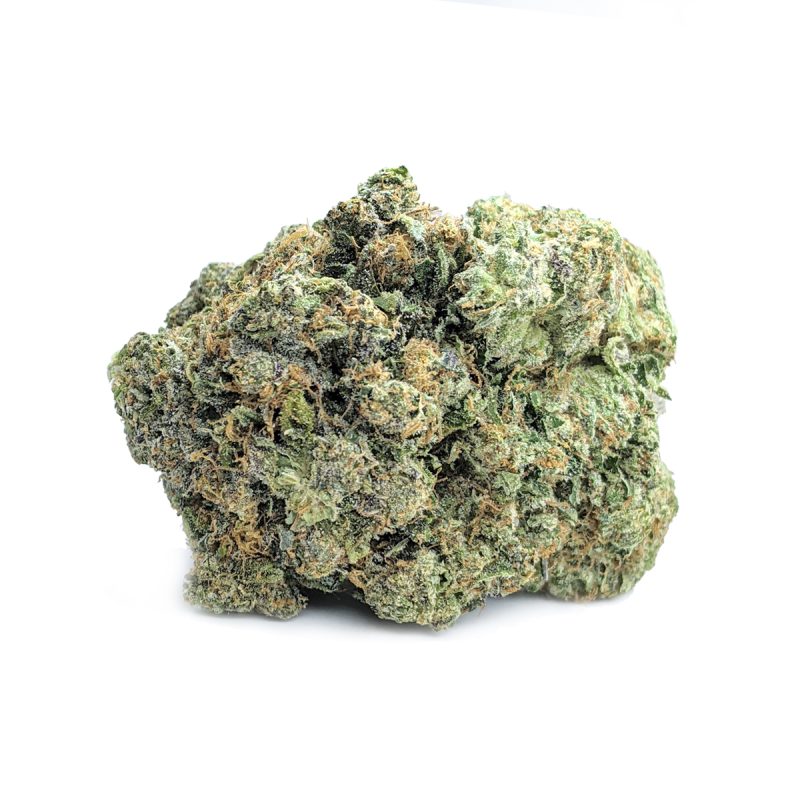 Rated 4.67 out of 5 based on 6 customer ratings
6 Reviews
Email to a friend

“Whenever i see anything labeled Mike Tyson as a gas/diesel lover, i’m all over it every time. These fresh, bright green and orange buds are cobwebbed in trichomes. Really dank and rock solid buds that stink of kush and gas. Busted up huge and rolled a fat cannon. Lit up instantly (which i love) and resin drips back as it burns. The smoke is really clean, excellent quality, tastes of kush and is really, really strong. Inexperienced users take it slow on this one as it will creep up and couch lock you. DANK GAS SWEET FIRE”

Like its namesake, boxing champion Mike Tyson, Mike Tyson KO is a strain with the sheer power to knock you out where you stand. Although Mike Tyson himself has taken up cannabis farming, having opened up a weed-themed resort in the Mojave Desert, this pure indica is actually the creation of Canna Clinic. And while the strain’s genetics have been kept proprietary, there’s nothing secret about Mike Tyson OG’s potency. Its THC content has been measured at between 12% and 21%.

Mike Tyson KO sets itself apart with solid, medium-sized flowers. These buds tend to cling together in an elongated, almost cylindrical formation and maintain a typically indica structure, with a dense core. The small, twisting leaves are a pale shade of green and are twisted through with deep red and rust-colored pistils. Finally, a sprinkling of rust-colored trichomes coats the inner and outer surfaces of these flowers, making them very difficult to break up without a grinder.’

The first whiff of these sticky flowers reveals their predominantly dank scent, redolent of damp soil. Hanging out underneath is a slightly sweet, floral aroma. Meanwhile, grinding up the buds releases the rich smell of hash and spice, perhaps suggesting descent from Afghani. When combusted in a pipe or a joint, Mike Tyson KO gives off a harsh smoke that may trigger a coughing fit. This smoke tastes sweet and skunky on the exhale; it can also be very pungent, so those toking in public should take any needed precautions.

An indica to its core, Mike Tyson KO needs some time to warm up before hitting users with its full force. After 15 minutes or so, consumers may notice an increased blood flow to the head, accompanied by some flushing in the cheeks or a pressure around the temples and eyes. Once smokers acclimate to these sensations, they free enjoy the spectrum of disorienting effects that Mike Tyson KO has to offer. For some, this bud can seriously warp their sensory perception, with possible visual and auditory distortions like an amplification of certain sounds or a flattening of depth and perspective. Some consumers also report more abstract effects like an uncanny feeling of time dilation.

To fully appreciate these immersive physical properties, set the mood with some spacey music or TV — may even an old Mike Tyson match. Besides these trippy, mind-bending qualities, Mike Tyson KO does not do much in the way of mental stimulation. Instead, be prepared to stretch out where you comfortably can, as the strain’s palpable body high start to set in. Waves of relaxation may relieve any points of acute muscular tension as they render any of your earlier stress or preoccupations irrelevant. Mike Tyson KO is not the best choice for accomplishing a lot of work, as it’s more likely to slow down cognitive function and strip away energy and motivation. Instead, save this strain for a lazy day when you have nothing serious planned. It’s a fun way to unwind with like-minded friends and a great accompaniment to passive activities like crafting or binge-watching. Because of its almost entirely drowsy vibes, Mike Tyson KO is recommended for evening or nighttime consumption.

Mike Tyson KO’s sedative properties give it several applications for medical cannabis patients. It can temporarily soothe the troubling effects of stress, depression, and anxiety. It may also work against physical pain, dulling aches and pains, as well as minor inflammations like nausea and headaches. The sleepy vibes that set in on its later end can also effectively treat insomnia. Because it is not likely to bring about intense, recursive patterns of thinking, Mike Tyson KO may be a good option for patients who are prone to panic or who may have a low THC tolerance.

Mike Tyson KO  makes a great bedtime treat after a long, tiring day. If you’re smoking it in public, though, be wary of its pungency attracting some unwanted attention

Whenever i see anything labeled Mike Tyson as a gas/diesel lover, i’m all over it every time. These fresh, bright green and orange buds are cobwebbed in trichomes. Really dank and rock solid buds that stink of kush and gas. Busted up huge and rolled a fat cannon. Lit up instantly (which i love) and resin drips back as it burns. The smoke is really clean, excellent quality, tastes of kush and is really, really strong. Inexperienced users take it slow on this one as it will creep up and couch lock you.