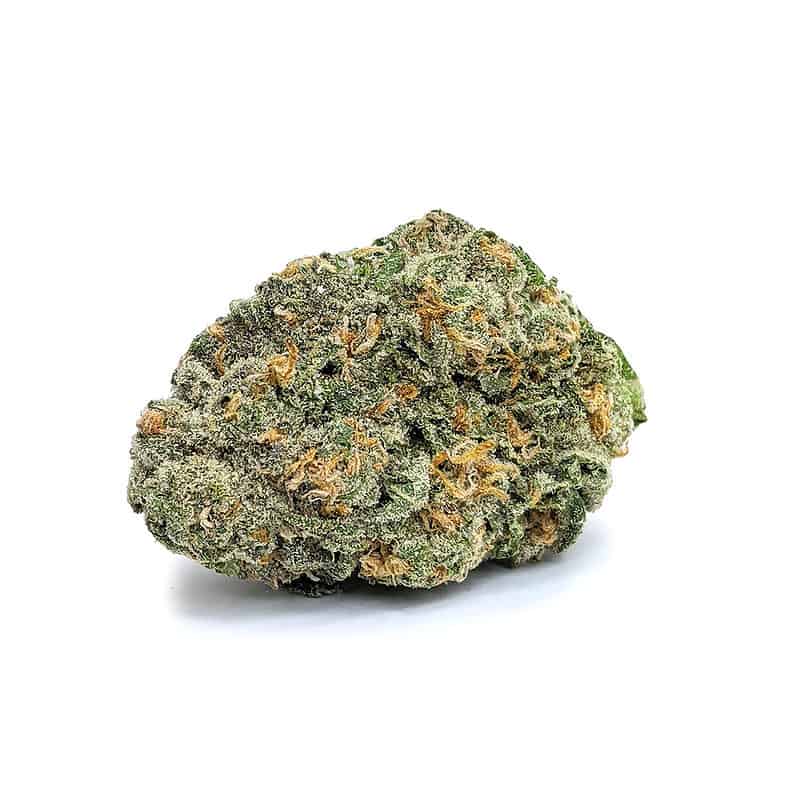 UK Cheese cannabis is also known as Exodus Cheese and has large, fluffy buds that adhere in an elongated, roughly cylindrical shape. The flowers’ loose, sativa-like leaves spiral off of their calyxes. It’s a hybrid strain that originated with British breeders Exodus. When cured, these leaves are typically a dark shade of forest green and are twisted through with orange and brown pistils. Finally, a relatively sparse coating of sticky trichomes covers these buds and gives them a wet, dewy appearance.

This strain is notoriously pungent – it gives off a powerfully tangy and slightly sweet odor, like aged blue cheese. Breaking the buds apart yields more damp, earthy notes. These contrasting scents make for a strong, sour taste that some users describe as unpleasant. After exhale, a sharp tang may linger on the palate. Those consuming in public should note that UK Cheese can be a very pungent strain whose odour may carry; anyone concerned with maintaining discretion should take the necessary precautions.

UK Cheese has quick-acting, euphoric effects that initially lean towards the sativa end of the spectrum. Initially, the strain make itself known with a subtle tingle around the eyes and temples. Additionally, smokers may sense a change in perception, as certain external stimuli take on new intensity or dimensions. As they adjust to these physical sensations, users report an uplift in mood that is not necessarily accompanied by a strong cerebral focus.

Eventually, these happy, floaty feelings progress into a body high that starts off as tingly, as waves of relaxation begin at the base of the neck and spread downward through the core and limbs. As users feel themselves unwind, they may notice that deep breathing happens more easily and that any muscular tightness is loosened. As the high progresses or as dosage is increased, couchlock becomes more and more likely. In its later stages, UK Cheese can be helpful for kicking back after a long day or week of work. Because of its two-stage high, this bud is best enjoyed in the afternoon or early evening when smokers can fully savour the decrescendo into motionless relaxation.

UK Cheese can also have several benefits for medical cannabis patients. Psychologically and physically the effects of UK Cheese are said to be perfects for:

Because its mental effects are more hazy than intense and cerebral, UK Cheese can be a good option for patients who are prone to panic or who have a low tolerance for THC.

As craft Cannabis strains continue to proliferate, UK Cheese retains its popularity as a strong, middle-of-the-road hybrid. Much like Thin Mint Girl Scout Cookies, it is an excellent example of how even distinct phenotypes of a single strain can be selectively bred to create an entirely new variety.