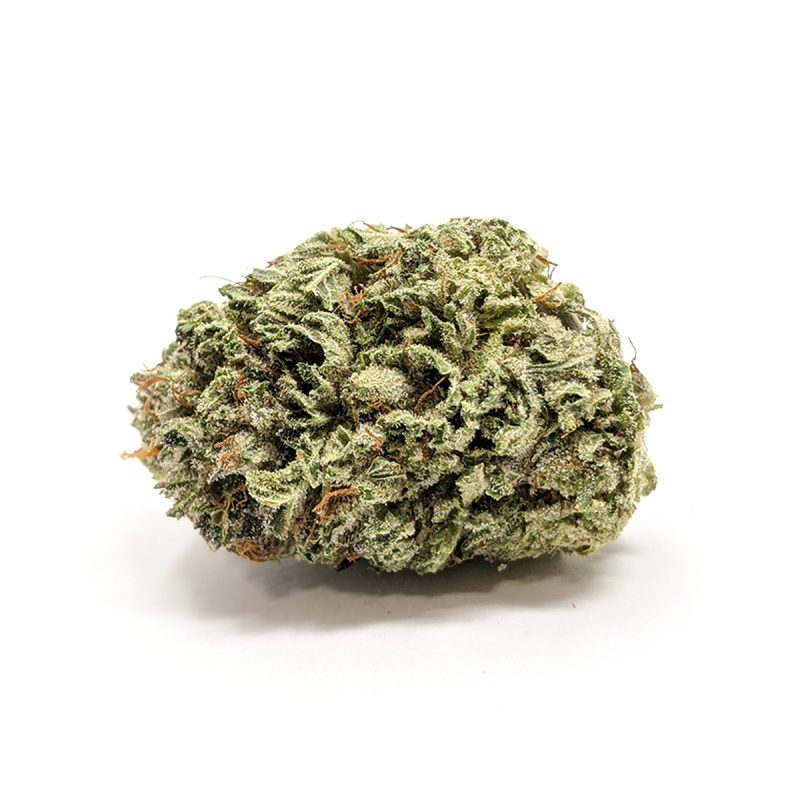 The term “OG” has generated some confusion in cannabis genetics — while many assume that the letters are an abbreviation for “original gangster,” they actually signify that a strain is “ocean grown,” in forgiving Pacific climates. True OG is a strain that exemplifies the best of this California-cultivated lineage. Developed by Elemental Seeds, the strain is bred from OG Kush stock and offers versatile and well-balanced effects. True OG’s potency has won it the title of 2nd Best Indica in the 2010 High Times Medical Cannabis Cup. Its THC levels have been measured at between 15% and 24%.

Flowers of True OG can be identified by their small, squat stature. The buds are relatively small and adhere in a tapered, pinecone-like shape, with distinctly pointed tips. The leaves curl tightly inward in the dense bud structure often associated with indicas. These leaves are a pale sea green and are beset with curly orange and brown pistils. Finally, a coat of cloudy white trichomes dots the inner and outer surfaces of the leaves, giving True OG’s flowers a white sheen when viewed from a distance.

When properly cured, flowers of True OG erupt with a rich odor of fresh pine mixed with skunk. On closer inspection, there is also an underlying dank, earthy quality. Meanwhile, grinding up these buds yields some incense-like notes, likely carried over from grandparent strain Afghani. When combusted, True OG burns with a somewhat sour, acrid smoke that can tickle the palate and sinuses and induce coughing. Nevertheless, this harsh smoke has a pleasant pine taste, accented a hint of citrus on the exhale.

True OG’s high tends to creep up slowly, sometimes taking as long as 10 minutes to show itself. Initially, smokers may detect a growing pressure around the forehead and temples. As they acclimate to this sensation, users are enveloped in a warm wash of euphoria, as any prior stresses or cares melt into the background. Some trippy effects may also be present, such as changes in depth perception or a feeling of time passing more slowly. Psychedelically-minded users can intensify these effects with atmospheric music or a moody movie. For those in a more productive mood, True OG provides also considerable stimulation for the mind, sparking the free association of thoughts and ideas. This mindset makes the strain a great accompaniment for complicated, task-based work. True OG can also be a fun accompaniment to mundane activities like cleaning the house or running errands. As the high wears on or as dosage is increased, True OG is more and more likely to weigh down the limbs and eyelids in equal measure. At this point, couchlock is a real possibility — and any previous efforts at lucid productivity tend to dissolve. In all, True OG is great for cozying up and kicking back alone at the end of a long, stressful day. Because of its gradually decreasing energy, this strain is recommended for use in the late afternoon or early evening.

True OG can also have some true utility for medical cannabis patients. Its mood-altering properties can temporarily improve the symptoms of stress, depression, and anxiety. It can also soothe physical pain, whether that pain is temporary, as due to injury, or chronic, as due to conditions like lupus or arthritis. In high enough doses, True OG can lull even insomniacs into a deep and restful sleep. Those who are prone to panic or who have a low THC tolerance should exercise caution when consuming this bud, as its initial mental stimulation has the possibility of leading to paranoia.

As True OG is Elemental’s flagship strain, they have made seeds of this bud widely available for sale online. It can be grown indoors or out, although outdoor cultivation calls for a semi-humid, Mediterranean-like climate. Plants tend to be short and bushy and can be easily accommodated indoors. True OG flowers within 8 to 9 weeks and offers growers a moderate yield at maturity.

Indica and sativa lovers alike should toke on this popular strain to understand just why it’s so renowned. True OG’s thick, long-lasting high and powerful aroma also make it a winner for lovers of old-school cannabis genetics.