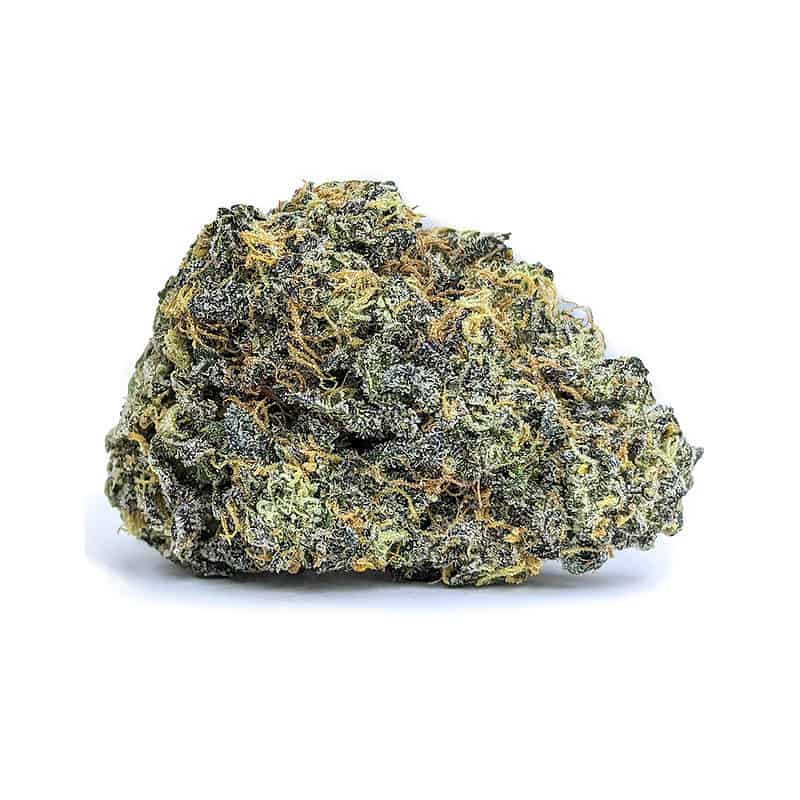 A hybrid with built-in name recognition, Blueberry Diesel is of course a cross between Blueberry and Sour Diesel, two popular strains in their own right. This mellow bud is both mentally and physically relaxing; although it has a slight indica edge, there’s substantial mental stimulation to be found in the high as well. A great middle-of-the-road smoke, Blueberry Diesel’s THC content has been measured at between 13% and 23%.

Blueberry Diesel cannabis establishes its bag appeal right away with big, chunky flowers. The buds adhere in a dense, indica-typical structure and have a tapered, almost conical shape. Leaves are a mossy green and are shot through with dark, rust-colored pistils. Occasionally, phenotypes of Blueberry Diesel often have flashes of dark blue and indigo in their flowers — these colors come about when pigments called anthocyanins in the strain’s genes are stimulated by colder than average weather during the growing process. Finally, white trichomes cover these nugs, giving them a sticky and slightly moist texture when freshly trimmed.

Unsurprisingly, blueberry is the most prominent that wafts up from these flowers in fruity and tangy waves. As astringent gasoline tang also comes through on closers inspection, thanks to the Diesel in the strain’s background. Grinding up the buds yields some dank and earthy notes. Surprisingly for a Diesel-inflected strain, Blueberry Diesel burns with a very smooth smoke when combusted. Nevertheless, this smoke leaves behind a fruity and somewhat sharp, acrid aftertaste. Notably, this bud’s blue hues are coincidental to its blueberry flavor — while botanical color is determined by pigments, aroma is dictated by separate compounds called terpenes.

Blueberry Diesel offers a creeping high that may only become apparent several minutes after users have savored its unique flavor. Initial effects can be detected as a tingle around the eyes and temples. Smokers may also develop a sudden interest in external stimuli, with bright colors and music taking on new, more intense dynamics. Although users may also become increasingly thoughtful, this mindset is characterized more by a rambling creativity than by any kind of analytical focus. As such, Blueberry Diesel cannabis may not be the best strain to smoke before delving into work. As the high wears on, physical relaxation tends to set in, pulverizing muscular tension and allowing deep breathing to happen more easily. In these later stages, this bud can be a great way to add a giddy kick to social gatherings; it can provoke conversation and camaraderie. A great way to kick back without being totally immobilized, Blueberry Diesel is best enjoyed during the afternoon or evening, when its sedation and slow waves of euphoria can be fully savored.

Blueberry Diesel cannabis can also have several applications for medical cannabis patients. It can stimulating hunger, helping to recover appetite for those who may have lost it to illness or to chemotherapy treatment. Its physical relaxation can also relieve pain, whether it’s incidental, as due to injury, or chronic, as due to conditions like arthritis or lupus. Psychologically speaking, Blueberry Diesel can also temporarily take the edge off of stress and depression. Because its sativa onset is not particularly cerebral or intense, this strain may be a good choice for those who are prone to panic or who have a low tolerance for THC.

This strain’s combination of heady effects and a rich, complex aroma make it a great all-purpose strain. If you break it out at a party, be sure to bring enough to share, as its fruity clouds are sure to turn some heads.

I was definitely expecting a stronger aroma on this bag just by the strain and by judging the looks of the buds from the outside of the package. Upon opening the bag i was expecting to be “smacked” in the sinuses with an overpowering sweet and gassy aroma but i find this batch to be rather mellow and not the pungent gas i’m used to from Tyson Farms. Now even saying that, I find this batch is still extremely powerful especially for the cerebral as the euphoria produce behind the eyes is strong and tends to lean towards couch lock. The flavour is mostly sweet with a bit of an earthy exhale and a small linger of sour diesel that sits on the tongue for a bit after each haul – tasty, but mellow. The buds themselves are beautiful. Long and large spear shaped buds are completely frosted in furry stalked trichomes and the colours are mostly bright lime green with only a few darker leaves as the majority of the them are a mix of blues and purple’s giving the buds a beautiful overall look aesthetically. The smoke produce is thick and creamy while producing copious amounts of sweet resin burning off a light grey ash with just a tiny bit of speckling. Great batch!