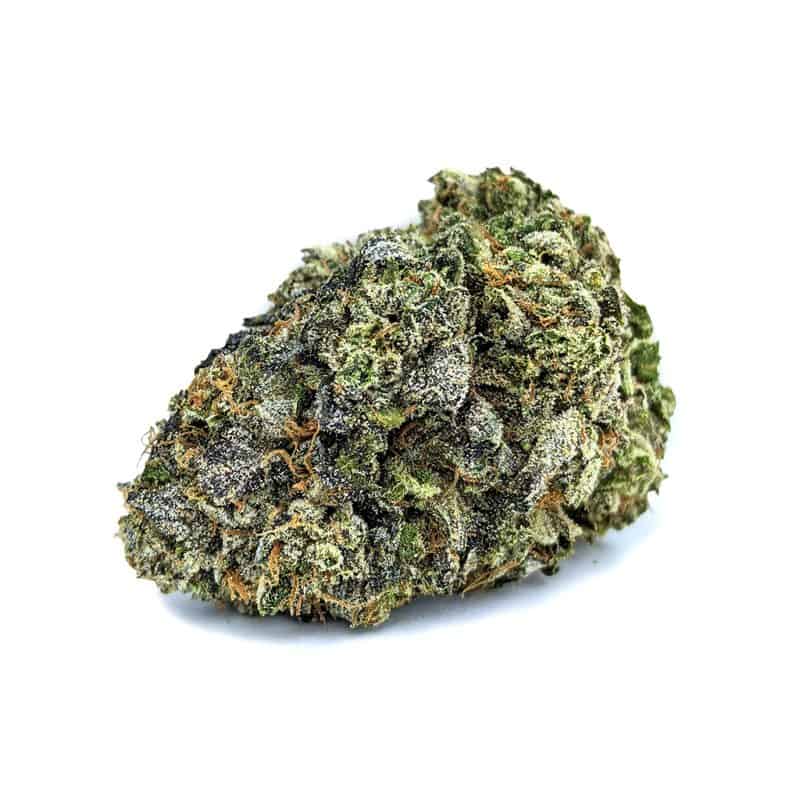 Purple Kush cannabis is a pure indica that sets itself apart from other indica hybrids with its eye-catching colors and pleasant taste. It was originally created by breeders in a neighborhood of Oakland, California dubbed Oaksterdam, one of the oldest legal medical marijuana areas of the United States. Purple Kush is a cross between two South-Central Asian indica landraces: Hindu Kush, from the mountainous Pakistan-Afghanistan border, and a purple-tinged variety of Afghani. With 100% indica genetics, it provides a slow and relaxing full body stone. Named a Top 10 Kush Strain by High Times magazine in 2016, Purple Kush has THC composition ranging from 17% to as much as 27%.

This strain has medium sized, popcorn-like flowers when cured, with a very dense, heavy bud structure. Depending on the phenotype, leaves can be equal parts green and purple. The tendency towards purple, selectively bred from the Purple Afghani parent strain, comes about when the plant’s anthocyanins — pigments similar to chlorophyll — are activated in cold growing conditions. This process is similar to the breakdown of chlorophyll and the stimulation of red and yellow pigments that causes foliage to change colors in autumn.

As with parent strain Afghani, Purple Kush also has a very high capacity to create sticky resin, making it valuable in the production of hash and other concentrates. The tightly-curled flowers are covered in trichomes, giving the green and purple leaves a dewy white sheen. Orange pistils, intended to catch pollen from male plants, stand out against the already-colorful flowers.

Purple Kush’s bag appeal isn’t only limited to visuals — the buds also have a standout taste. The initial impression is similar to the odor of Afghani strains, with an earthy, almost sandalwood musk. Closer inspection brings out sweet and fruity notes of grape. When combusted, the flowers have a simultaneously fruity and hash-like odor and smoke, which can sting sinuses and bring about heavy coughing. On the exhale, smoke from Purple Kush cannabis has a sugary grape-like taste that may remind some of sweet dessert wine or purple cough syrup.

Unlike some hybrids that start off with a disorienting head high that melts into a slow sense of calm, Purple Kush eases you straight into physical relaxation. Although there may be some mental effects, they have more of a psychedelic, distorted nature than a cerebral one. Smokers may appreciate the calming effects of music or of tactile surroundings. Rather than stimulate hyperactive thoughts and sharp focus, however, this strain is more likely to bring about a state of dopey contentedness. The perma-smile and heavy body stone that come with Purple Kush definitely call for nighttime enjoyment of this indica knockout. Purple Kush can also effective as a medication. Its powerfully sedative effects can blunt some symptoms of anxiety and depression. It can also be surprisingly effective in relieving pain — both situational, like the aches that set in after a workout, or chronic, like the nerve-related pain that comes with cancer or fibromyalgia. In large enough doses, Purple Kush is also a great way to treat entrenched insomnia. The strain’s high is said to have an average duration of 2 to 3 hours.